Since he was 13, Brryan has been sharing his story about overcoming HIV and depression. It's been a long battle, and hope has been vital to his recovery.

"Since I was 13, I have been sharing my story about overcoming my battle with HIV and depression." 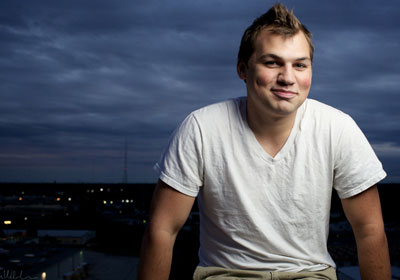 I am from Saint Louis, Missouri and I am 25 years of age. Since I was 13, I have been sharing my story about overcoming my battle with HIV and depression. When I was 11-months-old, my father intentionally injected me with HIV-tainted blood, hoping to end my life so that he would never have to pay child support.

My family didn’t discover this until 1996, when I went from being a playful, energetic 5-year-old to a vomiting, feverish sick kid, given just months to live. My father was later charged and is still serving a life sentence in prison. Meanwhile, I was left in a different prison, having to deal with a virus that restrains me mentally, emotional, physically and socially while I was growing up. It still affects me today.

Because of the problems I have faced, I now work to spread my story to try and help others who may be struggling with issues in their own lives.

(Learn more about Brian’s story in this BBC Interview).

Growing up most people were uneducated about HIV/AIDS – I was constantly bullied in school, wasn’t included in common kids activities (birthday parties, sports, etc.) and had a difficult time fitting in. Being an outsider and being repeatedly told I was going to end up a statistic, I had to switch the script and change my own self-talk. I firmly believe in having hope and that we can create our own story, rather than letting others determine it. This shift in perspective was really what got me through my most troubling times.

I realized that I didn’t want to be an angry kid anymore and I wanted to make a difference in my life and in others. These few things really helped:

Being hopeful is vital

Forgiving and letting go of the past

Trusting you have everything you need to overcome

Talk about your feelings and struggles! It does no good to deal with anything alone. Alone is a lie! There is a true strength and self-value to admitting struggles in life. People love to wear masks and pretend rather than be honest and find solutions. Know that you matter and that hope is what reminds us that everything is going to be ok.

I wish there was an abracadabra moment in life to make all of our problems go away, but the truth is everything we go through has a reason; whether it’s for us or somebody else. You matter and have a purpose, put on a good fight and show the world your passion and story.

My suicide attempt did not end my life, but instead become the turning point in my recovery from depression. I didn't think it was possible.

Receiving support for depression was key to Tommy's recovery. "The support I received when I finally reached out was a monumental relief.

Bryce is the Founder of The One Project, a therapeutic photography community. Learning how to fight depression through photography was key to his recovery.