Gogan shares his story of overcoming depression, from "wanting to take my life" to recovery. Having people to open up to was a key part of getting better.

"Ridding yourself of depression is not about adding missing pieces to yourself, it is about letting go of all the thoughts that are telling you you’re not already complete." 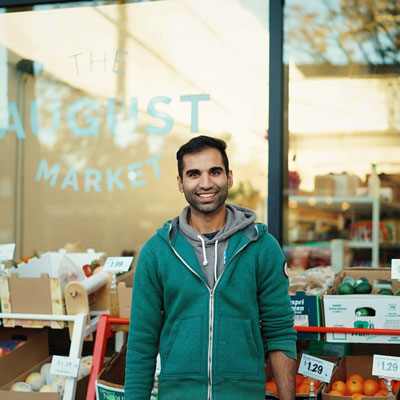 I’m 28 years old and own a grocery store. I love writing and making people laugh. I would love to start working with people to help them realize they are capable of anything no matter their situation. Check out The August Market’s Instagram, @theaugustmarket, to get an idea of my personality.

At the end of 2010, I set a date I would take my life if I felt nothing had improved. But when the date finally came I instead felt an enormous freedom, as I realized I could either take my own life or do literally anything else with it. I didn’t realize then, but it was the first time (in a long time) that I accepted the moment for what it was, rather than resist it because it wasn’t what I wished it would be. That started a journey of self discovery for me.

I made a decision to do whatever necessary to change my life, even though I had no idea what I would actually do. In early 2016, I once again contemplated suicide, it was a very different experience and now I feel I have seen the root of the issue and healed it, rather than dealing only with symptoms like I had been for many years.

Having people to open up to

Getting a job where you feel as comfortable as possible

Accept the situation you’re in and from there take action towards the progress you would like to make. No one knows better than you, what you need – trust yourself.

Explore the things you wonder about and jump into the dreams you fear because that’s all you’ll ever really want. You are complete as you are, you always have been and always will be. Water rains from the skies, food grows on trees and oxygen surrounds us in the air we breathe and yet society has spent years conditioning us to desire needless things and that dissonance is where I feel our depression arises. Every step you take is part of your journey, don’t begrudge it, the greater your struggle the greater your reward, as the person you turn into in order to deal with the struggle is always worth it. Ridding yourself of depression is not about adding missing pieces to yourself, it is about letting go of all the thoughts that are telling you you’re not already complete.

– Gogan Shottha, owner of The August Market, based out of Vancouver, BC, Canada.

The major turning point in my recovery from struggling with depression, was actually opening up to someone and talking about what was going on.

Scott, a software developer and skydiving instructor, shares his story from being diagnosed with depression to recovery and what helped the most.

P. shares his experiences with depression and grief after the unexpected passing of his father. "Understand that addressing your emotions takes time."