Julian shares his story of recovery and how talking about depression was a crucial step. "Don’t hide your depression and expect it to go away."

"When you are fighting anything, the fight becomes a lot easier when you realize you are not fighting alone." 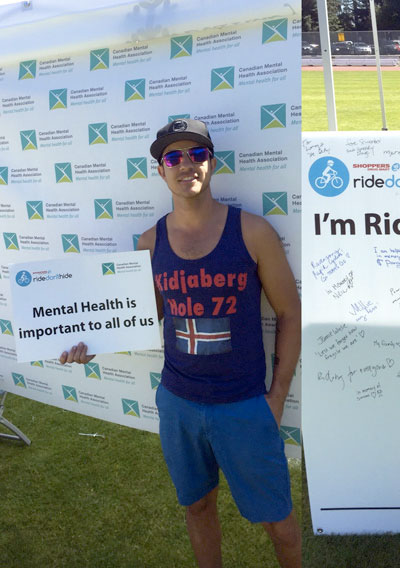 Three years ago I was scrolling through social media and came across an article a careless person had written, with a photo showing police tape cornering off a block.  There was a comment that said “sounds like a case of the Mondays.” I later found out that a person had jumped from their building and that’s why the police tape was there. I can’t begin to explain how much pain this caused me, having lost two friends to suicide the subject is very sensitive.  At that point I realized people were not understanding what depression really is. The next week I started a project called Hole 72. My goal was to educate people on this awful disease, raise awareness, and also raise money to get people the help they so greatly need.

Depression had never been something I ever thought of to be honest.  I didn’t know much about it, and I thought it was uncommon. After high school I made it one of my goals to travel the world.  I met some amazing people on my travels, I grew as a person and to this day have not lost my passion to embrace other cultures of this world.

When I came back home after my first trip, the world seemed to spin at a much slower rate.  There would be days on end when I would be so unmotivated I would do nothing but sit in my room and cry.  I am usually a very active person, however this period of my life sidelined me.  My desires to do anything were completely gone.  I gained weight and I really had no idea what was going on. Upon further research and through some professional help, I came to the realization that I had depression.

While there are a few different ways to take control of depression, for me open communication worked best. We as men tend to shelter our feelings and be tough. I thought when I first spoke up I was being weak, but in fact it was me talking about my weakness, that ultimately made me tough and made me into the man I am today – an engaged man, a grateful man, and a man in control of his depression.  It may not fully ever go away,  but the moment it shows its ugly face all of us will know how to fight back.

– Julian, mental health advocate and founder of Hole 72 based out of BC, Canada.

Jonathan shares his story, from thinking about suicide to recovery. "Don’t hide your depression and expect it to go away."