Russell shares how acknowledging and accepting his past, helped him to grow beyond them and move forward in his fight against depression.

"This might be the most crucial thing for me – accepting that things happened, but I could finally acknowledge that they did, and grow from them." 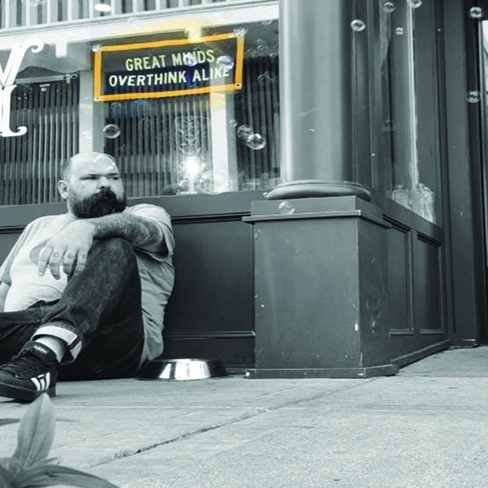 I’m a small business owner that found solace in making soap – telling guys truthfully that I used it as a coping mechanism instead of dealing with my brother’s death, and now I quite literally have my own soap box in Davenport, Iowa – alliedbarber.com.

It was in May of 2018. I had gotten to the point that I had a plan for ending my life. Knowing that I didn’t really want to – but feeling that everyone would be better off.

In 2010 I survived a suicide attempt. I laid paralyzed on the floor of my kitchen in my small apartment watching the world fade away. I wanted to die. I pumped my body full of drugs and alcohol and just faded into the black. Turns out I’m a fast metabolizer.

In 2016 my brother took his own life – and it rocked me. What happened to me, his kids, our family, would have been the effect of what I had previously attempted.

Two years later, I found myself being eaten up inside by his loss, and well, a life full of nearly every traumatic thing that can happen to a guy.

The mindset that having feelings in general is not masculine – is such a farce. When you’re in the middle of this stuff – it’s hard to maintain the semblance of being a “good man”. My depression took over. I wasn’t a good dad. I wasn’t a good spouse. I definitely wasn’t a good man. Telling yourself over and over that real men don’t need help, or whatever – is what leads you to not being a real man.

What you feel like is other’s perception of you is often so off base – and you don’t realize it. You know who you are. What you really need to ask yourself is: “is that the same way that people are seeing me?

I thought I was being a good dad, spouse, person, whatever.

I had walled myself off so much that my daughter, who was 12 at the time, told me that she believed I didn’t love her because I wouldn’t interact with her. I was terrified of shedding my trauma on to my kids – and I was doing it anyway.

Ask yourself if you’re doing the same thing.

Because not dealing with it is also teaching them to do the same thing. Stopping that cycle is about as masculine as it gets. Giving them a better life than you had doesn’t mean just buying them new things.

Throughout October 2021, we are sharing stories of recovery and practical tips from men who have overcome the worst of their depression.

Steven shares how he stopped judging himself and how therapy, building a support system, and medication helped him overcome depression.